Lipstick has a fascinating history, and through time has been a key element in the appearance of many powerful, famous and iconic women.

Ancient Mesopotamian women are often credited as the first to wear lipstick- using crushed gemstones to decorate their lips, whilst apparently Cleopatra used to crush ants and bugs mixed in a base of beeswax to colour her lips.

It is believed that lip decoration was originally practiced to please the gods in ancient religious occasions and ceremonies.

Mimicking the flushed red look a female gets during arousal, lipstick was also used commonly by prostitutes to attract male customers, and in turn shunned by upper class society. It was only until Queen Elizabeth I (considered quite the trend setter!) started wearing a strong red signature lip that it became more acceptable to wear by bourgeois society standards.

Through history women such as Marilyn Monroe, Elizabeth Taylor, Rita Hayworth, Madonna, and Dita Von Teese have all made a red lip their signature look.

It is an easy way to dress up a look for evening, and create a powerful statement of confidence and sexuality.
Whilst in the 40’s and 50’s it was common to have a very defined lip shape, a more modern take on the look is to opt for a lip stain or bold red gloss. 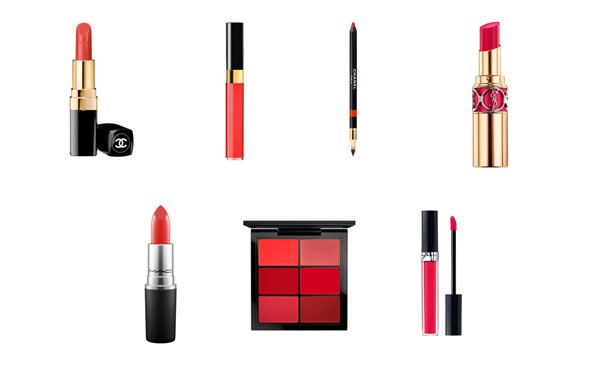