‘Ultra Violet’ by Alexander Knox – November 2005 (Level 2, outside near Rivers) 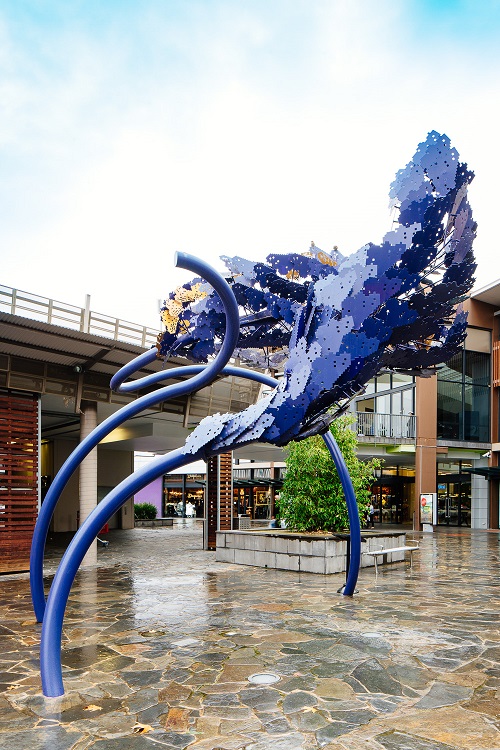 Knox’s art practice draws on a diverse range of ideas and influences from nature and the constructed world. He looks for ways to communicate multilayered ideas of place and meaning through a coded and sensorial language. His works employs striking sculptural elements that dynamically engage with their environment and the viewer. To this end Knox uses a multitude of devices including active lighting, optical effects and in some cases audio and kinetic elements. Through these processes Knox explores issues relating to perception, identity, and subjectivity within the immersive culture of a late capitalist spectacle.

Highpoint acts as a vast town centre where crowds of people and their cars are funnelled through elaborately managed systems, which are often renegotiated into a myriad of uses by Melbourne’s inner north and western diverse ethnic and cultural groups, and the demands they make of their town. This mass of humanity that surges and ebbs throughout the centre everyday create an organic entity that is at once individual and collective.

Ultraviolet is a rhapsodic exploration of the swarm; in particular the displays of synchronised behaviour that become a single mega organism seemingly possessed by emphatic purpose. This phenomenon of individuality that interacts with each other without obvious leadership towards common outcomes is a type of self-organising behaviour that peaks interest from the likes of advertisers to stadium designers all eager to learn the pragmatic wisdom of the group - that a large group of individual creatures communicate to their flock-mates a number of commands and checks, combining to create a complex and flexible behavioural system.

Formally the work Ultra Violet consists of a spline, a line of flight drawn in three dimensions in steel that dives into the ground plane and reappears as if unimpeded. Following or perhaps creating this path is the swarm, a group of several hundred polychromic fragments. These fragments mass in dynamic forms suggesting the actions of attraction, repulsion, and peer referenced orientation, all flocking strategies we instinctually employ in the course of our everyday lives.
Follow us on our socials and subscribe to our newsletter to be kept up to date!
Subscribe
Opening hours
Mon - 9am - 5.30pm
Tue - 9am - 5.30pm
Wed - 9am - 5.30pm
Thu - 9am - 9pm
Fri - 9am - 9pm
Sat - 9am - 6pm
Sun - 10am - 5pm